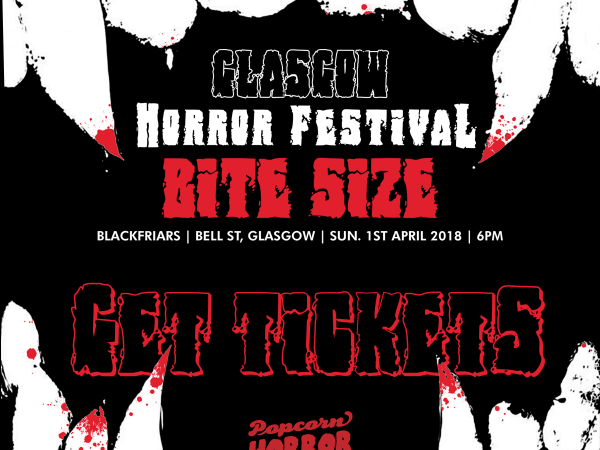 We know that horror is for life, not just for Halloween! Glasgow Horror Festival: BITESIZE is there to fill the long months between Halloweens, and provide a more condensed version of our annual October event. We're packing a lot into a single spooky evening though, with a horror feature double bill, two shorts programs, guest performer and horror raffle. Plus opportunity to pick up Popcorn Horror merch (and, of course grab some popcorn).
As always we will be showcasing the very best of independent horror talent, films which are innovative, inspiring and horrific. Glasgow Horror Festival aims to prove that creativity and quality filmmaking do not require a Hollywood budget, and to showcase horror outwith mainstream franchises to our local audience.

7:20PM - Breakout Shorts
Another Game by Riyad Barmani and Ashens
Tense conceptual horror – ‘A short atmospheric horror film. A group have signed up to a mysterious lottery with disturbingly high stakes, where their thirst for dominance blinds them to the risk they take.’

ECHO by Infinite Studios / Aimie Willemse
Eerie Scottish short – ‘As Hannah explores an abandoned tunnel alone she hears someone else in the dark… or something?’

Policy by Donavon Thompson
A warning to theater guests – ‘A young boy buys a ticket to a movie theatre and gets the show of a lifetime. In fact, it may just be his last.’

SON by David Graham
Realistic, gritty Scottish horror – ‘You can’t choose your family . . . After his mother’s untimely death, a troubled young man tries to reconnect with his family, while struggling with a secret he has hidden all his life.’

CARNIVORES by Conor Dowling
Dark micro-short – ‘A super short post apocalyptic horror movie about a three desperate people who will do anything to survive.’

Clever, eerie tale told in under 2 minutes – ‘A freerunner practices at an abandoned railway… or so he thinks.’

8:10PM - Bella in the Wych Elm - folk horror documentary on one of the UKs most infamous unsolved crimes.

8:50PM - Classic Shorts
IN THIS ECONOMY: An underfunded entrepreneur will do anything to get his one of a kind app developed. He has zero issues going to morbid lengths to pay rent to his demon landlord. From director Ty Huffer.

LIMIT: Powerful film from Iran following a disabled man as he asks for help from his neighbors. But when they enter the house, they discover the cause of the mans distress - something truly disturbing in the basement. From director Javad Daraei

The Corpse Series: Dan's idiotic housemate James brings home a prostitute and it is all downhill from there in this gory but very funny horror-comedy. From director James Button Filmmaker.

9:15 - Cruel Summer (& Original, exclusive documentary) - Danny is an autistic teenage, who enjoys the serenity and solitude of camping. That's all about to change when enraged teens Nicholas, Calvin and Julia find him, each with their own agenda for wanting to see Danny suffer. From director Phillip Escott
Cruel Summer will be screening with an original documentary created by Popcorn Horror, RJ Bayley - Voice Artist, Sound Design & Audio Productionand the Cruel Summer team ahead of June's Disability in Horror Month.

Join us this April for an evening packed with spooks and thrills in the heart of Glasgow, surrounded by your fellow horror fans, freaks and geeks of the city.